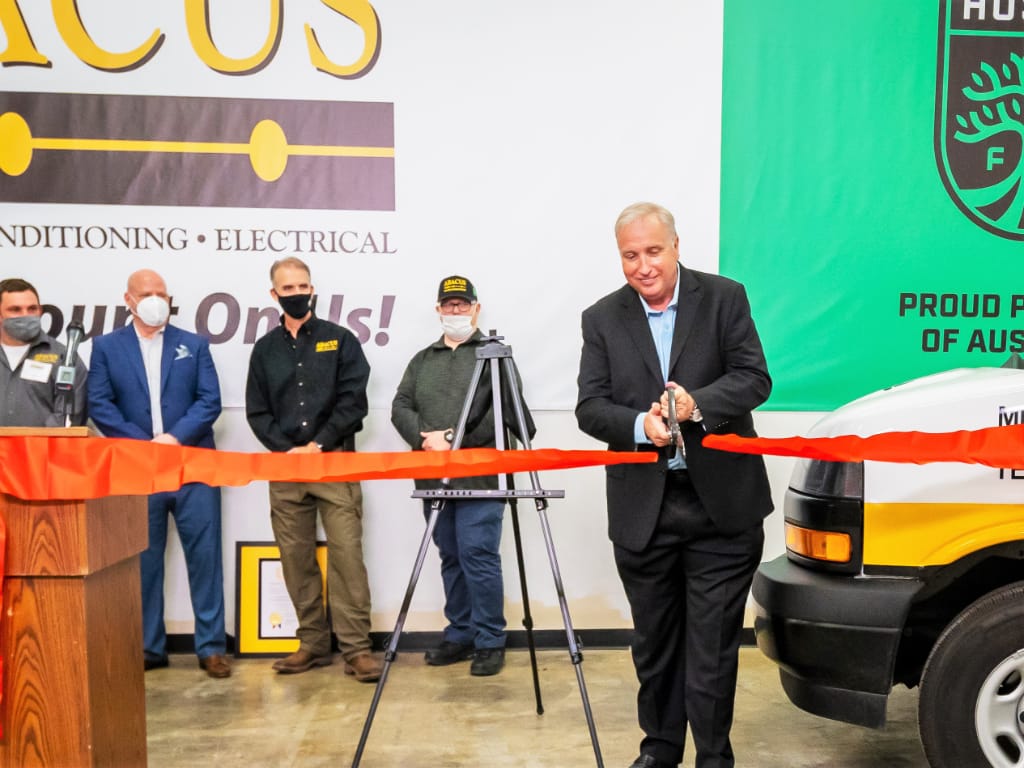 Abacus has served generations of Texans as  one of the leading home service providers in the state since 2003, and is excited to start helping Austinites with all of their plumbing, air conditioning and electrical needs.

Abacus’ grand opening celebration was held on Friday, May 7th at their new Austin headquarters located at 2105 Denton Drive in North Austin and streamed online via Facebook. Abacus’ Founder and CEO, Alan O’Neill, cut the official grand opening ribbon. “We’re just super excited to be in Austin. It’s an amazing town, it’s a great place to be and it’s an even better place to come for work,” says O’Neill. “We’ve been in Houston for 18 years and we felt it was time to spread out wings a little and as we looked around Texas we thought, what better place to be than Austin.”

Mr. O’Neill spoke about the incredible partnerships that Abacus has already established within the Austin community. Among them is Abacus’ partnership with Austin FC and the announcement that Abacus will serve as the organization’s official plumbing, air conditioning and electrical partner. Alison Roscoe, Vice President of Corporate Partnerships with Austin FC, was in attendance and presented Abacus Plumbing with the team’s first official, signed Austin FC jersey to mark the beginning of this partnership.

Duane Moore, General Manager of Abacus in Austin, spoke, saying, “I’m thrilled to be launching with two great partners; Austin Pets Alive and  Austin FC. We’re already having extraordinary results and our main goal is to provide  five star service to all our fellow Austinites.”

Abacus is also a strong supporter of the work Austin Pets Alive (APA) is doing in the Austin community. A representative from the non-profit was also in attendance and Mr. O’Neil presented a $1,000 donation to APA as a symbol of their growing partnership and support. Austin Pets Alive was able to bring a dog that is up for adoption to the grand opening that goes by the name of “Charlie Brown”, which Mr. O’Neill noted is the same name of the first employee he ever hired to work for Abacus and who to this day continues to be a valued employee with the company.

Abacus guests, employees and partners were able to mingle and enjoy lobster rolls from Garbo’s Fresh Maine Lobster food truck and were in attendance as a lucky viewer of the virtual ceremony was named as the winner of two tickets to a much coveted Austin FC home game.

Abacus Plumbing, Air Conditioning & Electrical has been serving Texas since 2003. Founded by master plumber Alan O’Neill, Abacus Plumbing maintains an A+ rating and has earned multiple years of Awards for Excellence with the Better Business Bureau. Abacus only hires licensed and certified technicians who pass a rigorous drug and background check. All pricing is provided up front and offers a 100 percent job satisfaction guarantee. Abacus is part of Wrench Group, LLC, a national leader in home repair, replacement and maintenance services specializing in heating, ventilation and air conditioning, plumbing, water, and electrical services. Wrench Group collectively serves over 700,000 customers annually across twelve markets and sixteen brands in the United States. For more information, please visit us at wrenchgroup.com. To learn more about Abacus Plumbing in Houston, visit abacusplumbing.net or for Austin, visit abacusplumbing.com.