Austin, We Need To Winterize 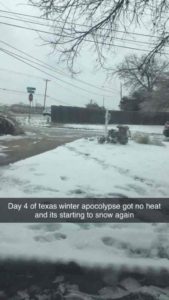 Winterizing a Home in Texas

As winter approaches your hill country homes, we’re beginning to consider our experiences of last winter. The “snowpocalypse”: of February 2021 is still affecting us months later. Some of us are paying off plumbing repair bills, while others are researching alternative heating sources. And nearly everyone is wondering how do we prevent this from happening in the future? To prepare for the upcoming winter, DIYlifeguide has some winterizing suggestions.

Written by DIYlifeguide  in Uncategorized

The February 2021 winter storms hit Texas and paralyzed its power grid and other utilities for weeks. Peoples homes were devastated by burst pipes spewing water everywhere and gas leaks leaving many without heat. Many may be asking how do we prevent this from happening in the future. How can we not only winterize our electric grid but also spread awareness on what to do when crippling low temperatures hit as far south as Texas.

Many of the consequences of this storm could be easily prevented but temperatures this cold in Texas are so rare everyone got caught off guard. This kind of weather is normal in other parts of the country but it has no consequence because people are more prepared. Global climate change will bring increasing tumultuous weather everywhere in the world. Freezing cold may become a more frequent event in Texas and everyone should be prepared for this to happen again.

How do I winterize a home in Texas?

Should Texas winterize the electric grid?

I think everyone would agree it would be nice if the electric grid under ERCOT was winterized. However when it comes to the dollars and cents the private electrical companies don’t want to shell out the investment. The Texas grid is very unique in that it is unaffiliated with the federal grid and thus can skirt federal regulations and oversight. We should press our politicians to put their foot down with these companies and require beefier infrastructure that can handle colder weather. However its going to be an uphill battle as temperatures as cold as February 2021 haven’t graced the region in over a hundred years. Its hard to motivate people into something that has a hundred year return on investment.

In the meantime we should control everything in our sphere of influence and consider if being energy independent is a good idea. Drilling private wells if permissible, collecting and storing rainwater, investing in solar panels and backup generators and adding an auxiliary heat source are all steps that can make you safer when there are outages.

When You Want the Best Results

All Abacus Plumbing Austin technicians are seasoned, well-trained professionals. They have performed hundreds of ductwork inspections and can work on any system. Austin homeowners can be confident in the quality of work that Abacus technicians provide.