Abacus featured on CBS Austin: Tips from the experts, how to prevent air conditioning failure during the heat

Posted in: Abacus in the News, HVAC Tips 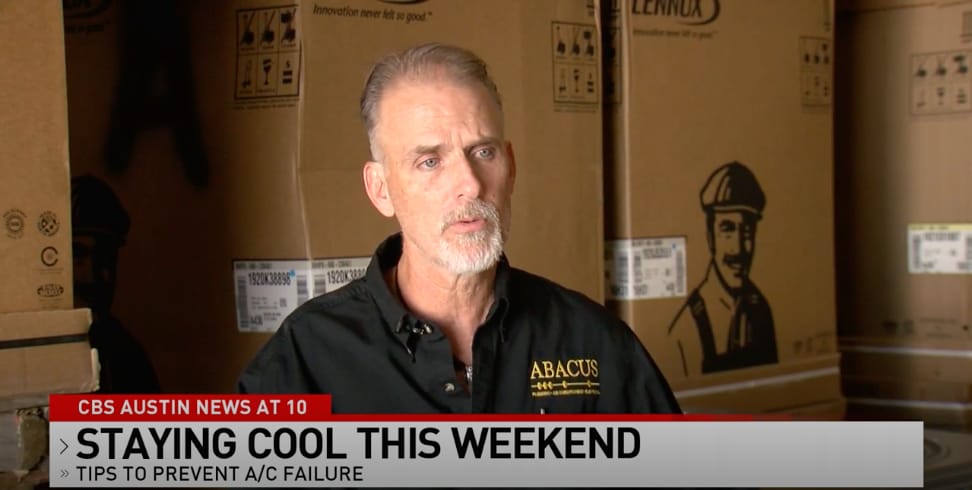 The original article appears on the CBS Austin website »

Major heat is on the horizon for the weekend in Texas and other parts of the country, which means air conditioners will be working overtime. Abacus Plumbing, Air Conditioning shared some do’s and don’ts when it comes to running your air conditioning unit, so you can stay cool during the scorching temperatures.

“Everybody’s calling us so our phones have been ringing a lot,” said Vic Fredlund, HVAC manager at Abacus.

Vic Fredlund with Abacus Plumbing, Air Conditioning & Electrical says business has been booming now that central Texas is feeling the hottest temperatures of the year.

“It was crazy. So the beginning of last week, you know we’re talking 68-70 degree days. So when this happened, it happened all at once. Everybody felt it all at once,” he said.

To help keep you cool and out of the heat, Fredlund says to be mindful of some important maintenance duties when it comes to your air conditioning unit.

He also says your unit should be maintained by a licensed technician to be sure it’s working efficiently. And when it comes to the thermostat, Fredlund advises keeping it on through the day versus shutting it off.

You know people think that it’s more economical or more efficient if they run their air conditioner at 75 degrees. When they leave for the day they think, well I’m going turn it off. People don’t realize that when they get home after a 98 degree day, that air conditioner is going to run longer to bring it back down to 75 versus if they had just turned it up to 78 or 79 degrees. So smaller movements is going to be better in the long run,” he said.

You should also make sure there aren’t any bushes growing near air conditions units that would prevent airflow.

“If you’ve got bushes that are growing up on the side of the unit, and coming down on top of the unit, you’re really kind of affecting the airflow and going to make the unit run a lot hotter and a lot harder. So that’s going to create a failure or at least an increase in energy usage,” says Fredlund.

He also says Abacus has been ordering necessary equipment ahead of time to prepare and navigate any supply chain issues.

“If you feel like it’s struggling a little bit. Don’t wait for Fourth of July weekend, don’t wait for Memorial Day weekend because that’s when everybody’s calling and you’re going have limited resources to get it fixed. So if you feel like they’re making a weird noise or it’s not keeping up, call now,” he said.